How Does a Tree Grow 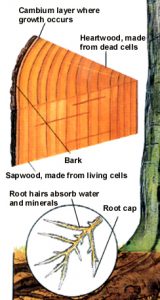 Trees grow in two ways. In a young shoot, bundles of cells form. These are a primary kind of wood known as provascular tissue. As the shoot grows, a layer of cambium forms across and between the primary bundles where each year, cells in this layer divide and grow. As the cambium divides, wood and bark cells form. Cells pushed outward from the bark which eventually splits and falls off and is replaced. A tree’s upward growth occurs at the tip of each twig. (See diagram to right).

The inward growth of the cambium forms the main part of the trunk and is called xylem. Tiny tubes which transport water and minerals from the roots up the trunk and branches to the leaves make up the xylem. Leaves need this water to help them make food from sunlight. The outward growth is protected by a layer of phloem. The phloem is made up of tiny tubes that transport the sugars from the leaves to the rest of the tree. If the phloem is damaged the tree will die.

Roots may not go down deep but they can spread outward as far as the tree is tall. Roots anchor trees to the soil and absorb water and soil minerals needed for growth. Some trees have deep tap roots; others have a spreading system of roots.

Roots as they push through the soil are aided by a cap that forms over the tender growing point of each root. Beyond this point, myriads of root hairs extend into the soil, increasing the surface area of the root and increasing the amount of water the tree can take up.

In some trees a difference in color exists between the outer part of the wood, the sapwood or alburnum, and the inner part, the heartwood or duramen. The sapwood is the light part of the wood as seen in cross-section. It is the most recently formed wood, the circle farthest from the central cylinder. Sapwood is the physiologically active part of the wood through which the sap rises and has a high level of humidity. Thus, it is susceptible to rot and vulnerable to attack by fungi and insects.

The heartwood is the part of the trunk nearest the center, the older part, which makes up the greater part of the trunk. It is simply a form of the sapwood modified by aging and differs from it in its greater compactness and darker, more intense color. Humidity is lower in heartwood and its cells walls are thickened by deposits of tannins, resins, starchy substances, coloring matter and oils. This part of the plant is already dead, performing only the functions of support and storage.